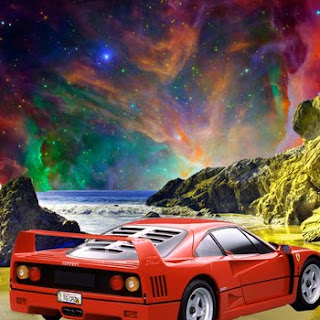 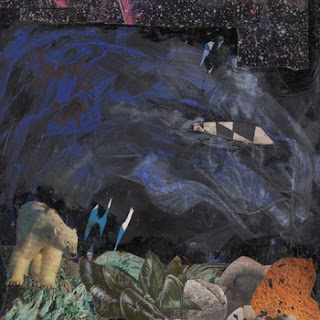 artwork by Zak Mering from "Dark Side", an IMSOSORRYDAD BOOK
Posted by GunkTVRecords at 2:19 PM No comments:

GIMME THAT 'I Kontact' 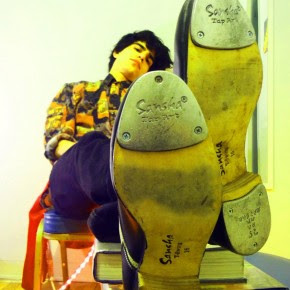 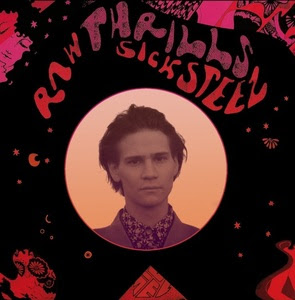 After much waiting, the time has nearly come for the release of Raw Thrills’ new album, Sick Steez. Expert new music critic, Carly Raymond, takes a listen – one by one – to Sick Steez’ tracks to find out what makes this album such a unique little gem. Available to pre-order now through Raw Thrills’ Japanese music label, Sixteen Tambourines, Carly explains why this album is not one to be missed.

Good quality psychedelic rock is as hard to find these days as a good banker. Yet Raw Thrills manages to capture this genre perfectly in his new album, Sick Steez, his second LP to be released on vinyl.

Intro-track, Makin a Change, is an infectious and psychedelic track, providing an instantly uplifting start to the album. Melodic guitar riffs settle the listener into the music nicely, providing a comfortable yet enjoyable listen. The track has many different elements to it though, and pretty soon you are surprised by a change in vocal style, the lead voice suddenly switching from conventional rock to an eerie experimental wail, which adds to the intrigue of this track.

Tomorrow is a jolly little Swinging Sixties-inspired Strawberry Alarm Clock cover projecting a warm, summer vibe. The track displays many hints of traditional rock n roll, reminiscent of some of The Beatles’ earlier work. A track that is very much in line with current fashions in the alternative music scene, Tomorrow is a cool indie crowd’s dream; the type of track that would grace many-a-portable speaker around a beach bonfire. Jamen Whitelock from Regal Degal makes a guest appearance for this track on the drums.

This track experiments with tempo. First appearing a down-tempo track, Run Spot Run suddenly gathers pace in the chorus, injecting into the mix a range of long-lasting harmonies and discords. This is leftfield, experimental soft rock at its best and the perfect ambiance for that relaxed evening indoors.

Goin' down to the store

This track resonates a warped, trippy, rock-hop beat. Its style is dark and dirty, combining deep and low electric guitar chords with higher, piercing synths. The regular male vocal complements the falsetto vocal well and add to the story-telling feel of this track.

If you leave him feat. Band Substance

Injected with an atmospheric mix of electric guitar parts, If You Leave Him is a laid back, yet poignant display of emotion. Two too-cool-for-school kids sing the same lyrics to each other, giving the impression that they’re in a slightly tired situation. The track is a collaboration with sister Natalie Mering (Weyes Blood), together they are known as Band Substance.

Hey starts off with a strong, catchy and rhythmic guitar rift. An uncoordinated mix of guitar parts and floaty male vocal provide an edgy element to this retro-feel track.

This track is of a slightly different style to the rest of the tracks on the album with the music composed and recorded by Ariel Pink and the vocals and lyrics written and sung by Zak Mering; Raw Thrills’ deep and despairing vocals are sung over a faint seventies-style disco beat. Vocals have been slightly distorted, with an intentional muffled megaphone effect. Intriguingly, the chorus breaks into a childlike voice, providing a stark contrast to his voice in the verses, and helping to explain the meaning and emotion behind the song.

This is one of the catchier tunes on the album, and easy to sing along to. It’s another classic retro summer vibe guitar part, added to with an element of surprise by a digitally distorted vocal filter. This is the first of many planned collaborations with the talented Ryan Howe from Punks On Mars who plays guitar and bass on this track.

Possibly the strongest track on his album, Leave Me Be is a Zombies cover that comes to its own in the chorus, which it delivers with impact, successfully building on the simplicity of the verses and offering a satisfying crescendo. A simple, yet powerful track – and there’s a great guitar solo in the bridge. Jamen Whitelock returns on the drums once more in this track.

This track conjures up comforting memories of sitting in a lesser-known smoky backstreet city rock n roll bar, indulging in the exquisite pleasure of discovering all sorts of amazing sounds from times gone by. It has a real Lou Reed Velvet Underground vibe despite being a brand new track.

Another of the strongest tracks on the album, originally popularized by The Turtles in 1967, You Baby actually sounds like it was written and recorded fifty years ago; perfectly capturing the essence of an era gone by. You Baby is a catchy, sweet and perfectly-formed little number. The chorus is brought into its element with the title line, with the singer’s voice rising to reach its crescendo on the word ‘you’.

This track is harder rock n roll, with a more traditional guitar riff. The addition of falsetto vocals works well, and complement the higher-pitched warbling guitar part. Don’t Confuse Me is a laid-back, cool and seductive number, which wouldn’t sound at all out of place as a mood-setter on a cool kids’ date.

October Sky uses simple and melodic guitar riffs, providing an easy-to-listen-to experience and a journey into a pleasant and imaginary world.

This is an upbeat, funky track that you just can’t help but sway and swagger to. Definitely the type of track that’ll make you want to get up on your feet and shake your stuff to. This track has bags of attitude and style and is bang on trend in terms of what is hot in the indie rock scene right now.

Cold and Lost Inside My Dreams

Starting with a melodic and harmonic electric piano riff, this is a slow-moving and evocative outro instrumental. Subdued and eerie, Cold and Lost Inside My Dreams beautifully and simply lingers on, taking you to a place far away. It’s a great atmospheric composition that finishes Raw Thrills’ album off perfectly.

Carly Raymond is a freelance writer from England who primarily works for finance blogs covering the best savings accounts. Carly is not affiliated with Gunktvrecords.
Posted by GunkTVRecords at 12:29 PM No comments:


Easy For Me (It's Not That) video directed by Z. Mering, filmed in Paris, France. Features guitar and bass by Ryan Howe from Punks On Mars

Album Cover Artwork by Dewey Saunders
Posted by GunkTVRecords at 12:12 PM No comments: